The Beginning (in case you missed it!)

My story begins in Maine.

Before all of that, I grew up in rural Maine. I was born second eldest of ten children. Ten. There were ten of us. 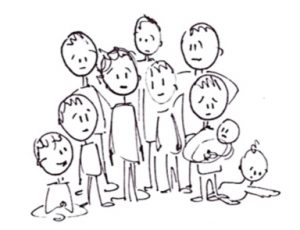 In my mind’s eye I have an image of my mother when I am a girl of 9 or 10. She is standing at the kitchen sink washing dishes. There is something radiating from her. 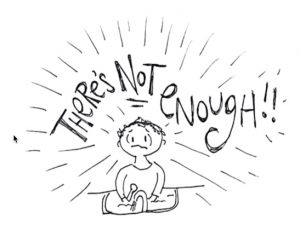 It’s neon sign strong and it gets inside of me. That is how, before I even know what a ‘worldview’ is I begin seeing through the lens of scarcity.

I was a girl with scarcity consciousness who dreamed of being a great somebody someday. As great as the great French stage actress, Sarah Bernhardt.

At the Maine Mall I found the book, How To Break Into and Survive in the Theater. I bought it and treated it like the bible. I visualized and memorized everything it said.

It said if I were ever lucky enough to be cast in a production, I would earn so little money that I would have to have a day job, and that I would live in a small studio apartment in “the village” section of NYC where all the other struggling artists lived.

To 15-year-old me this sounded grand! 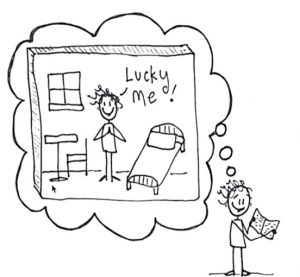 Dreams do come true and I grew up to be a struggling artist.

That I was a real life, working actor in New York made the struggling A-OK with me — though I often wished I’d spent my teen years visualizing a one-bedroom.

By the age of 30 I was ready to be done with the struggling, and to be – if not rich – at least not poor. I picked up Robert Kiyosaki’s Rich Dad, Poor Dad so that I, too, could learn from his rich dad what to do, and from his poor dad what not to do.

But his rich dad said something so appalling that I refused to believe he knew what he was talking about.

The rich dad told Robert that no matter how much a person made and saved, that person would end up back at the amount of money his “inner financial set point” was set at AND there was no changing that set point.

I flung the book across the room and set out to prove that stupid, rich dad wrong! But I didn’t. I proved him right.

Over and over again. 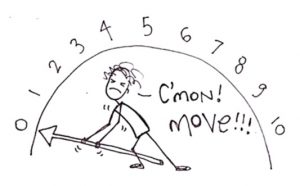 Skip ahead through lots of boom-and-bust, lots of striving-and-never-arriving, to the summer of 2015.

I’d just finished writing and illustrating the book FLAWD – How To Stop Hating On Yourself, Others and the Things that Make You Who You Are for Penguin-Random House with young anti-bullying pioneer, Emily-Anne Rigal. While writing the book I was living on Mousum Lake in Acton, Maine and from the outside my life looked idyllic. But the truth was, internally, I was suffering with hopelessness and helplessness.

My share of the advance money had been generous, but it was all gone. I was deeply in debt and nothing I was coming up with to build on having written a book that had been named by Oprah’s Book Club (alongside Elizabeth Gilbert’s Big Magic) as “one of 6 self-help books that really help” was panning out.

My M.O.?  Work harder, try harder, get even more creative, throw more spaghetti against the wall — something’s got to stick.

I was exhausting myself. And I was going down. Swimming alone in the lake one afternoon I thought how nice it would be if I could just will myself to drown.

It was disappointment and sorrow and being so sure that there was no way up and out. 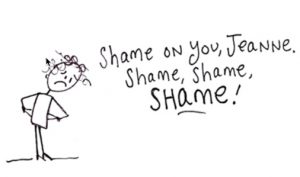 Thankfully, as bottom-hitting will go, the very most right thing came along just when I needed it most. That thing was a webinar promoting the Tapping Into Wealth Coach Training Program. It came floating across my computer screen. It was all about how to use E.F.T. Tapping to uncover and clear money blocks.

Struck by inspiration, I took the very last $4000 available to me on my credit card — money I needed available to me for every other thing in my life — and enrolled in this coach training program. Not because I wanted to become a coach, but because the magical thinking went:

“Spending so much money on this will make me stick with it until all my money stuff is resolved.”

Impetuous? Irresponsible? Convoluted thinking? Oh, yeah. That was how I operated with money.

Thankfully, in this instance, it turned out well.

There are gifts within our toughest stuff. The gifts are Callings. The Calling in coming so close to bottoming out financially?

“Stop resisting looking at what scares you most!”

And when I stopped resisting… guess what?

I began to see — actually be able to see — the roots of the beliefs that were affecting my money.

And when I could see this, money went from feeling terrifying to just plain fascinating. And with Tapping, I had a tool to transform what I was finding.

The difference “being good at money” makes in a life is hard to quantify. It’s just enormous.

What I do to express my huge gratitude for the distance I’ve been able to travel in this area of my life is I share the work with others.

I LOVE SHARING IT!! 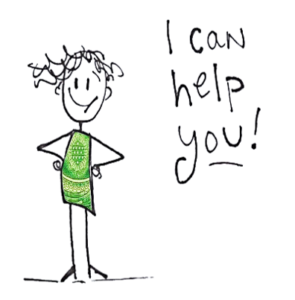 If you’re someone who’s ready to realize YOUR money goals, feel free to contact me. It would be an honor to help you take this particular journey.

Hit enter to search or ESC to close